2019 looks to be a big year for SRAM. The American specialist for components has been presenting one groundbreaking innovation after the other in a breathtaking rhythm. The latest highlights: X01 & XX1 Eagle AXS. The connection with AXS means a new dimension for SRAM’s famous Eagle! Thanks to 12 rear sprockets and electronic shifting there’s no need for a front derailleur and shifting cables. However, SRAM has not simply revised its top MTB shifting groups and turned them into electronic versions. Much more has been changed. First, the SRAM engineers invented AXS which is not just another shifting group or design but SRAM’s new electronic integration platform. Platform means that SRAM has created a digital basis not only for shifting components but for all future electronic equipment. AXS provides compatibility in terms of communication and power supply – and is not limited to individual components. It was not developed exclusively for either mountain bikes or road bikes, AXS works wit both.

And that’s still not all: AXS is not limited to SRAM components, it extends to products of the brands that belong to SRAM. For example, the new electronic RockShox seatpost Reverb is part of the AXS family. And it is not only able to communicate with the SRAM AXS rear derailleur, its battery could also supply the rear derailleur with power: in other words, battery replacement is not a problem! The functionality of the platform is also reflected in the name, which is pronounced “access”. Just as you would expect nowadays, AXS is accessed via App. This is where you can configure the settings and access your data. The AXS platform is nothing less than the starting point of a small electronic bicycle component revolution. In the future, even more parts will be added to the AXS family, extending the electronic SRAM universe.

But first of all we will deal with SRAM’s first electronic shifting products for mountain bikes. Bungi was so kind to share his first impressions with us! However, just a short overview in advance…

… the most important features at a glance

The new Eagle-AXS rear derailleurs are not simply electronic versions of their mechanical siblings, but have been completely revamped and differ from them in their design. Not only a small electric motor is placed here, the control unit is also located in the rear derailleur. The completely new construction is 1 cm shorter at the bottom, which results in more ground clearance. In addition, the rear derailleur is positioned a little further forward, allowing the chain to wrap closer around the sprocket. As Andi from SRAM explained to us in the video, this innovation does not only result in a better guidance of the chain but also lead to less wear.

One issue that SRAM was confronted with when designing the electronic shifting system for mountain bikes were possible hits to the rear derailleur. Unlike road bikes, MTBs may have to deal with stones, trees and bushes. The most sensitive part of the structure is the shift motor, which provides the selected transmission. To solve this elementary problem, SRAM has developed the Overload Clutch. If excessive forces act on the rear derailleur, this “clutch” will be activated and the rear derailleur will be able to move freely. Not just the engine, but also the rear derailleur itself and the derailleur hanger benefit from it.
Nothing has changed in terms of transmission bandwidth. As usual, the electronic Eagle reaches 500% with a 10-50t cassette. The battery is expected to last for 25-40 hours, which does, of course, refer to the net riding time. Both the shift controller and the controller for the seat post are operated with a button cell which should last for two or three years as only little energy is required.

Even dust, dirt and rain cannot harm the electronic Eagle components. With IP69K, they meet the highest industry standard for dust and water protection. Another thing you needn’t worry about is the wireless technology. An own radio protocol guarantees a secure transmission that cannot be manipulated. In addition to data transfer in the AXS network, the electronic Eagle is able to transmit data via ANT+ and Bluetooth. This makes it possible to connect to the app as well as to bike computers. Of course, the control element for the shifting has been newly developed. We are no longer dealing with a classic shifting lever, but with a controller that can best be described as a paddle shifter. But now, let’s get these parts on the bike!

“SRAM has finally done it: Electronic shifting is now also available for mountain bikers. The X01 is still aimed at riders who prefer a tough ride on the trail. As an enduro rider, I have waited long and eagerly for this to happen. All the more I was happy about the fact that I got the possibility to install a lot of the new AXS components on a Radon JAB. Apart from the X01 Eagle AXS shifting components, which in the end means a rear derailleur and a shift lever (the front derailleur has long since been removed), this included the RockShox Reverb AXS. A good example of what is meant by platform: the seat post can be easily integrated into the electronic system. Apart from the fact that the components are on the same wavelength in terms of communication, the batteries are also compatible. AXS really offers completely new possibilities.

Mounting the components could not be any easier. The absence of cables makes things super easy. SRAM has really made sure that the end user can install everything without any problems. Of course, the technology behind such electronic bicycle components is very complex. But this does not mean that things have to be complicated for the user. Well done, SRAM!
As you can see in the video, I easily managed to mount the controller and the rear derailleur (with the appropriate torque). The rear derailleur can be fixed in an extended position (standard for SRAM and very convenient!). Now put the chain through, lock it, remove the locking mechanism and you can already connect the controller with the rear derailleur. What follows are the last adjustments, which are done by using the three limiter screws. Take the SRAM rear derailleur gauge (as shown in the video) and check the distance between the rear derailleur and the sprocket – if necessary, adjust the B-screw. Now all you have to do is check the high and low end stops and, if necessary, adjust them a little, too. Ready! The fine tuning is done by the derailleur itself. Incredible, but true.

With the seat post it is similarly uncomplicated: just insert it using some carbon paste and fix it with the saddle clamp. It is, of course, essential that you pay attention to the torque of the seat post clamp. Really awesome: the seat post head. The clamping mechanism works laterally, making everything super simple. You won’t have to struggle with falling down screws and lock nuts here. There is just one screw at the front to align the saddle. All in all, the saddle is very easy to assemble and even easier to adjust. Last but not least, the seat post controller is attached to the handlebars on the left side. To connect the two parts you only have to press the button and the seat post will go upwards. Whoosh …

I configured the controller settings using the app. It is possible to distribute the different functions (shift up/down and move seat post upwards) individually to the three available buttons and to personalize the cockpit. The functions of the seat post controller do not differ from those of posts with cables. If the support is retracted and you press the button, it will go up. Same mechanism the other way around, only with the additional help of body weight: Press the button, sit on the saddle and the post will go down.

And then it was time to ride!

The first ride was absolutely smooth! The shifting components were perfectly adjusted, changing the gears was a clean and super fast affair – as usual with SRAM! Press the controller and the gears will immediately switch. You can literally feel the precision with which the chain is guided to its place on the sprocket. Switching is effortless even under full load. Rain and mud couldn’t do anything to the shifting comfort. The seat post also didn’t care about mud and splash water.

What I liked very much: the uncluttered handlebar. No cables! This does not only make assemblying the components easier, it also has benefits when riding. I can’t deny it: Eagle and AXS are a dream couple!” 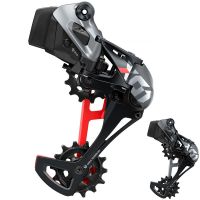