Whenever you want to take your bike with you to the training camp or on holiday, there’s a big question: How do I get it to my destination and back undamaged? If your destination can be reached by car, roof racks or rear racks are a good choice for you. But what if you go by plane?

Who hasn’t read about how luggage is treated when loading and unloading airplanes – there can be doubts whether one’s own loved bike should be expected to suffer such an ordeal. The consequence of this is to find a transport case that is specially designed for bikes. And it has to be really stable, have padding and be able to carry a lot. Of course, it must also be big enough to fit your bike without any problems, but not too heavy to remain transportable. Since Ralf was planning a business trip to Italy with a mountain bike anyway, it was obvious that he would test a transport bag from our range.

„A Radon MTB in frame size M and 29″ wheelset had to fit into the case. I chose the Bike Case II from B&W, which is positioned in the lower mid-price range. Thanks to its hard shell construction and aluminum frame, it promised the necessary robustness.
Due to the fact that it can accommodate large frames, the bike case is not exactly compact. It’s suitable for road bikes, triathlon bikes and mountain bikes up to a wheelset size of 29″. The hard shell box features a circumferential aluminum frame in the middle, which snaps into place when closed and thus offers good support.

When opening the box, you can find three foam padding mats, two wheelset bags and an accessory box with various assembly parts. Before using the bike case for its intended purpose, the luggage wheels must be screwed on. This requires open-end wrenches and screwdrivers.

After mounting the luggage wheels onto the box, the bike is partly disassembled. The 29″ wheelset fit perfectly into the wheelbags. A little tip: It‘s mandatory for most airlines to let air out of your tires. For bikes with disc brakes, the transport lock should be inserted between the brake pads to prevent the pistons from closing accidentally.
The two wheelbags are stowed in one of the hard shells and lashed down. Then the handlebar is disassembled and the frame inserted into the lower shell (saddle towards the lock side). Two Velcro straps and two straps with buckles hold the bike firmly in place during upright transport and ensure that nothing rattles. The handlebar is fixed to the frame or to both the frame and fork with two supplied foam blocks (brake lever towards the outer shell). The thru axles remain in the frame and fork in order to generate rigidity against possible impacts. Finally, the drivetrain is put into the chain protection, which could be a bit bigger in my opinion.

To get better access to the bike from all sides, you can separate the two shells of the Bike Case II from each other and put one to the side – this works quite easily and well, because they‘re only attached to the lower frame part. I also packed my bike clothes and a little more into the bike case. However, you should make sure that the maximum payload is not exceeded.
ZTo close the box, you just fold the two halves of the frame together. The two metal butterfly locks are then closed at the top, which also closes the aluminium frame. Lastly, the four blue Velcro straps are fastened to the sides. Butterfly locks can be additionally secured with locks, which is highly recommended.

Everything went smoothly at the airport. The prerequisite for this is that the bike must be booked as an additional piece of luggage (i.e. sports luggage). Before booking, it makes sense to read the exact regulations of the respective airline so that there are no unpleasant surprises. If you got travel insurance, you should also check whether it covers damage to or loss of your bike.
luggage wheels. The front pair is freely rotatable, the rear pair fixed. Handles are located on both sides of the Velcro straps, which are easy to grip and sit tight.

The bike case is then normally checked in as ‘oversize baggage’ – the check-in process varies depending on the airport. After a short flight, the pick-up of the B&W Bike Case II in the normal baggage area worked surprisingly fast. The bike case had already gotten a few scratches, but everything else was perfect. And the most important aspect: the bike was absolutely undamaged – mission accomplished!“ 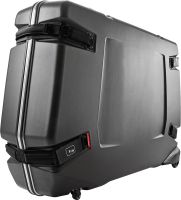