Lots of small components steps, one big step for road bikes … SRAM presents the RED eTap AXS!
With a revolution regarding the company‘s most powerful road bike group, SRAM once again breaks with a few principles and initiates a fundamental innovation in road cycling! After the introduction and establishment of the electric shifter group RED eTap for rim brakes and disc brakes, SRAM now launches its latest coup.

And we have already tested it: Many thanks to SRAM for the possibility to assemble the group in advance and to make the first experiences with the new road bike flagship group!

What hasn’t changed, is, of course, the wireless comfort, which we have already described in detail in terms of assembly and handling. The brilliant shifting characteristics and the clear advantages of a wireless system are the same with AXS.
To introduce them to you, we have even developed a new format called “First Ride”! Freshly assembled and immediately used … so let’s have a look at how to assemble the components first!

„It‘s an honour: I really enjoyed the privilege of mounting the revolutionary 12-speed eTap shifting group of the new RED AXS product line before the official release. Last year, I had already been given the chance to mount the 11-speed RED eTap and, naturally, I was now really eager to get to know the 12-speed group.

What’s on the test bike?

The new BD test bike is equipped with the HDR version, i.e. it features hydraulic disc brakes and matching shift brake levers. The rear derailleur is packed with technical refinements and now offers 12 rear gears. The front derailleur is also new, matching the new crank options, of course. We used a 50/37T crank (the power meter version with Quarq technology!), which replaces the 53/39 ratio and has a lot more to offer:
According to SRAM, the new 12-speed group represents nothing less than a revolution compared to the classic road bike ratio. At first it may look like a compact or cyclocross crank, but that’s just because the task of generating a huge transmission range has been shifted to the rear – 12-speed makes it possible!

As a consequence of switching to 12-speed with its elite road group, SRAM has modified the transmission ratio of the crank – and therefore also of the cassette. This means that there is a 13T difference at the front for all 2-chainring version, which leads to a significant improvement in shifting performance.

And now let’s take a look at the back: The RED XG-1290 CASSETTE with 10/33T provides a wider range of ratios without having to make any compromises. It offers a comfortable sprocket ratio, there are actually at least five steps with a difference of only one tooth. You can see that SRAM has really thought it through and redesigned everything. The result is a transmission range of 330%!

What struck me immediately was the very high quality of the individual parts. The chainrings are milled from one piece. Even the Quarq power meter version of the crank is very light. Of course, this is also due to the carbon crank arms!

The newly designed chain looks very fancy with its straight top! The light cassette is mounted on a SRAM XD freewheel of the Zipp 302 wheel as usual. The front derailleur finds its place without any problems or much fiddling: here, SRAM’s technicians have thought ahead and put a mark for the correct mounting height directly onto the chain guide plate.

The rear derailleur is also simply mounted to the frame with the matching hanger. The shift/brake levers were also easy to install. Attaching the brake hoses can sometimes be somewhat tricky. Not here, no problem. Bleeding the brake was also quite simple and quickly done due to the bleeding edge system!

After adjusting and bleeding the brakes, I established the connection between the rear derailleur, the levers and the front derailleur. This was just the same and worked just as fine as with the eTap as already described in the respective test. Then I used the B-Gap tool to align the rear derailleur and shifted through the gears. It took only a small correction of the rear derailleur position and the group shifted quickly, accurately and smoothly. It shifted so amazingly fast – unbelievable! Now Guido could finally take his First Ride …

„After everything was assembled and adjusted, we finally went out for a very first test ride with the brand new RED eTap AXS. As for now, I can only present my first few impressions, an extensive test will, of course, follow!
Shifting feels even faster and cleaner than with the predecessor model. What I really wanted to know was if I would be able to find the right gear at first hand? So I went up and into the mountains. Since it‘s the end of January and I am in a less than perfect shape, I was curious to see how I could cope with the first mountain and the new shifting group.

I was thrilled right away. With the transmission range 50/37 and 10-33 I could do better than with my usual standard 53/39. This is mainly due to the smaller steps and the higher range. So it wasn’t surprising that I was really fast on flat and descend roads due to the 10 sprocket! The braking performance was the same as I know it from disc brakes.

Since it was only a short test ride, I can’t say yet whether battery life, shifting and braking performance or other aspects have changed during long rides. Also the exact adjustment and the personalization of the shifting group with the new app could not be tested in detail yet. As I said, this will all be included in the complete review.

Nevertheless, I would like to draw a first small conclusion: The SRAM RED eTap AXS works fine right from the start, is easy to adjust and the maintenance seems to be very easy for an average mechanic. The speed of shifting, the precision and the transmission range as well as the small steps are unique and already perform great right from the first meters!“ 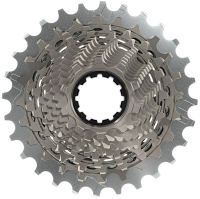