The “Pro” in the name already suggests it. What we are dealing with here is one of Five Ten’s top shoes. This is also reflected in the price, it is the most expensive Five Ten shoe in our shop. One of the reasons is the Boa closure system which does, of course, raise the question of whether you really need it and whether the performance of the shoe justifies the money you are asked to spend. Is the Five Ten Kestrel Pro Boa the cycling shoe the MTB world has desperately been waiting for? Come on Daniel, let’s put it to the test!

“The Five Ten Kestrel Pro Boa is a clipless shoe for Enduro/All Mountain use and particularly suited for extended tours. The 2019 model has been completely revamped and is not just some sort of color update or slightly upgraded version. The typical Five Ten style is still there, though, while the Boa closure system is something completely new: a twist lock that is easy to handle and locks cycling shoes very effectively once properly installed.

Let’s take a closer look at the whole thing. The Kestrel Pro is the result of high-quality design and workmanship featuring a synthetic upper material which is easy to clean and protects against splash water as well as mud. Since the shoe is rather flat, the ankles are hardly covered and thus little protected – this could be better. Of course, Five Ten’s famous Stealth Sole is also on board. The Kestrel Pro Boa is available in two color options, Active Orange and Black & Black. As you can see on the pictures, I tested the Active Orange model.

Choosing the right size can be somewhat tricky when it comes to cycling shoes. I opted for my normal street shoe size and had no problem. The shoes turned out to fit perfectly right from the start. What’s unusual for an MTB shoe is the lacing system. The Boa knob sits on top and regulates a wire which runs down to the middle of the shoe. In the lower area the foot is fixed by a Velcro fastener. This offers a wide range of options.

The innovative lacing system is definitely the highlight of these MTB shoes. With the knob, you can tighten or loosen them in less than two seconds. It‘s even possible to do so while riding … but let’s put safety first and only try this when the ride is smooth and the terrain‘s not too rough! To open the shoes you simply pull and unfix the Boa button which will release the wire. Thanks to this mechanism, feet falling asleep are definitely a thing of the past. The lacing system is not only easily readjustable, it distributes the pressure perfectly over the instep and thus ensures a good fit. I think it’s good that the excellent Boa closure system is now also available for MTB shoes after having been on the market for quite some time for road bike shoes.

Accordingly, the shoes felt very comfortable even after several hours on the trail. The ventilation was also satisfactory, especially considering the robust outer material. With the stiff sole, it’s easy to put a lot of pressure on the pedal. However, the Kestrel Pro Boa is not the lightest of shoes. In my size (43⅓), it weighs in at 480 g, which is rather at the upper end for this type of shoes. But on the other hand, the foot feels properly protected which is particularly important if you should hit something or fly off your bike. The special material in the heel area feels extremely strange in the hand but effectively prevents the foot from slipping out of the shoe.

The cleats are positioned comfortably deep in the shoe and can be adjusted very easily and accurately thanks to the markings. I used CrankBrothers Mallet pedals and there was nothing to complain about the interaction between shoes and pedals.
However: due to its low profile, the typical 5/10 sole is not exactly the best for long passages where you have to push your bike. On dry ground it works quite well, but as soon as it gets slippery or muddy, the ‘studs’ quickly reach their limits.

Everything was fine apart from the few little details I mentioned. The Kestrel is a great clipless shoe for mountain biking in rough to medium rough terrain. The Boa closure system takes both the comfort and fit of the shoe to a new level. A solid choice of materials provides support and durability, the sole is stiff enough for good power transmission. The whole package is good. Since we are able to offer you the Kestrel Pro Boa at a reduced price, the shoe is definitely worth the money!

There is, however, one thing I would still like to mention. It’s no secret that Five Ten was bought by Adidas a few years ago. Until recently, Five Ten’s liaison with Adidas could be considered a background affair. Now, it manifests on the shoes themselves. Next to the Five Ten logo you can find the famous adidas emblem with the three stripes. I’m sure that Five Ten has been benefiting a lot from adidas‘ technologies and their know-how. But even though I’m a fan of adidas when it comes to other sports and although the quality of their products is beyond doubt, I think it‘s a pity that the adidas logo is just as present on these shoes as the Five Ten logo. I personally hope that this does not mark the beginning of the end of Five Ten and that this MTB cult brand is not going to completely disappear at some point.” 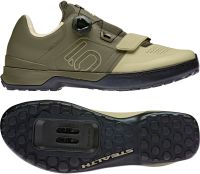